Build a Joomla Website is operated by me, Richard Pearce 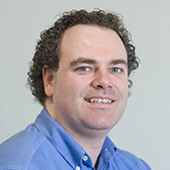 My web development career started way back in 1995. It was hard to find any information on how to build websites in those pre-Google days, but after a lot of trial and error, I produced this masterpiece:

Yep - animated gifs and all.

As the web evolved, it quickly became apparent that a system was needed to give website owners an easy to method to update their website content. Various solutions were born including Mambo which was effectively the precursor to Joomla. Given the nature of this site, you'd expect that I warmly embraced this new approach, but frankly, I hated them all. Early content management system templates had terrible designs, were clunky to use and website owners were just as confused as ever. I tried a whole bunch of platforms and ended up hiring developers to build my own CMS. However, Joomla kept appearing on the radar and I was eventually forced to learn it when a client came to me with a Joomla-powered site that needed some work. Just like it was back when I started as a web developer, there was very little information to help me understand how all the parts of Joomla fitted together. After a lot of frustration, I discovered what made it tick and suddenly everything fell into place. I swore that one day I would produce some training to help others caught in the same situation.

That opportunity came in 2008 when I found a website for sale called Build a Joomla Website. Since taking ownership, I have created hundreds of tutorials, and my Joomla courses have been viewed by over 50,000 students, either here or via my YouTube channel. I have made some great friends throughout the Joomla world, especially at the Sydney Joomla User Group. I have spoken twice at JoomlaDay Sydney and was involved in the Joomla Certification project.

In 2016, I launched Site Skills to help people Build Better Websites. I have many more courses in store to help website developers start and grow their freelance businesses plus courses for website owners.

Listen to more of my story

Peter Bui from the JoomlaBeat podcast interviewed me in June 2013. If you want to skip ahead, the interview starts around the 5:30 mark.